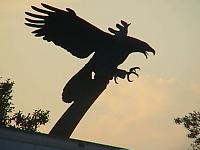 Auburn is Alabama's Fastest Growing City
Recent population estimates released by the U.S. Census Bureau show that Auburn is the fastest growing city in Alabama. Estimates show that Auburn added 2,135 from 2020 to 2021, more than any other Alabama city.
read more >

Cramming
double-a blog
We note the Supreme Court's ruling on public prayer. The case involved a football coach who prayed aloud on the 50-yard line after each game. After his supervisors told him to take it off school property, he refused to comply and his contract was not renewed for the next year.
read more >
area weather
.REST OF THE NIGHT... Partly cloudy. Patchy fog. Near steady temperature around 50. Southeast winds around 5 mph. more weather >
features
Europe 2004 Tour
Hawaii 2005